THE SUPREME COURT AGREES WITH HOBBY LOBBY, BUT YOUR NEIGHBOR PROBABLY DOESN’T,  is a great read from the the Gospel Coalition.   “As evangelicals, we can’t rely on the courts; we have to be in conversations. Not the kind of conversation where we debate the merits of a particular case or where we seek to back opponents into a corner, but the kind of gentle persuasion that rises from a joyful exuberance in one’s faith and a hopeful confidence for the future.” .

Speaking of the Hobby Lobby decision, I couldn’t resist…

Sticking With The Horse. (A Little TOO Long):

A GREAT overview (not a short read) of how the current crisis in Iraq came about.  It tracks both the success and failures of Prime Minister Nouri al-Maliki and more importantly why the US choose to continue to support him… right into the current mess.

An excellent Federalist article, “Six Myths About Monogamy“.  I loved this rarely told essential truth for effective parenting, “Raising children together requires a reservoir of trust between two people, which infidelity drastically undermines.”    Here is the opening paragraph, “Compared to older folks, Millennials undervalue marriage and its overall value to society, according to a recent Pew Forum poll The Atlantic publicized. When asked to choose between “Society is better off if people make marriage and having children a priority” and “Society is just as well off if people have priorities other than marriage and children,”  poll respondents that were between the ages of 18 and 34 overwhelmingly supported the latter notion.”

And You Though Brazil Got Whooped!

Brazil got thrashed at the hands of Germany in the world cup, but here is far more important (and revealing) contest that  has proven to be a costly defeat to our current culture.  It’s illustrated in Hugh Hewitt’s interview with,  “Zach Carter  the Huffington Post’s ‘senior political economy reporter'”.   The interview is classic Hewitt.  He is 3 steps ahead of almost all of his guests and this poor 31 year old (yes, the HuffPo “senior political economic reporter” is 31) is a good sport but buried by Hewitt (the transcript and audio can be found here).  It matters because this is a Huffington Post “senior” reporter!   The HuffPo is one of the most visited “news” and informations sites on the web (about 15.6 million page views per weekday).   Commenting on the interview The Federalist points out, “Trust in the media has hit record lows, according to a new Gallup poll.  I can’t help but suspect this statistic would look less grim if our media were even slightly more informed about the things they act like they know so much about.”

Speaking of the media’s crisis, in my last post I extolled Sharyl Attkisson for here investigative savvy on critical current topics (see her latest, Military Injustice? Maj. Weirick’s Incredible Ride).   In another post this week she wrote, “In a July 8 letter addressed directly to the president, the Society of Professional Journalists says the administration has taken part in “politically driven suppression of news and information about federal agencies.”  One last Attkisson shout out, here is an excellent interview with Sharyl on C-Span. (hat tip to Eric S. for the interview!)

And in case you not already outraged, Lisa Myers Agrees With Sharyl Attkisson: Media Less Eager to Hold Obama Admin Accountable .  It quotes her as saying (the obvious?), “Overall, the mainstream media has been less eager to hold this administration accountable than the Bush administration,” Myers, who left NBC in January after 33 years, said.

It’s hard to convince people that letting unemployment benefits end is good for the economy (and the unemployed).  The Wall Street Journal lays out the facts in, “North Carolina Got It Right on Unemployment Benefits”.

I Thought We ALL Agreed?

So much for consensus.   “Apollo Astronaut Says Global Warming Alarmists are Committing Fraud” and “Global warming computer models confounded as Antarctic sea ice hits new record high” (I love the “computer models confounded”, it’s rather nice though, this way the Climate Alarmist won’t be lonely being “confounded”).  And how’s this for SHOCKING! “It’s politics, not science, driving climate mania“.   You can all breathe a sigh of relief because, “Newsweek’s Antarctic Global Warming Scares Cancelled“.  And in case you need to be reminded, believing in fair tales (anthropic warming) can be costly, “Canada pulls the plug on the U.S. Keystone Pipeline – will send oil to Asia“.

Ok… One Selfie That Is Worth Watching:

From the great photo site: http://shutyouraperture.com .  She Takes Selfie Everyday For 6.5 Years While Battling Depression And Anxiety

Here is another great video from the same site: 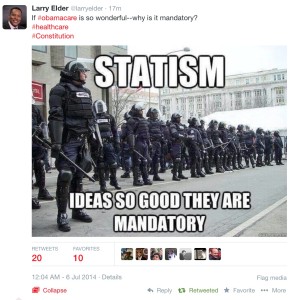 0 443
What the story of Martha & Mary tell us about life’s priorities.